Ma. Luisa Camagay honored during webinar on history of Manila and women studies 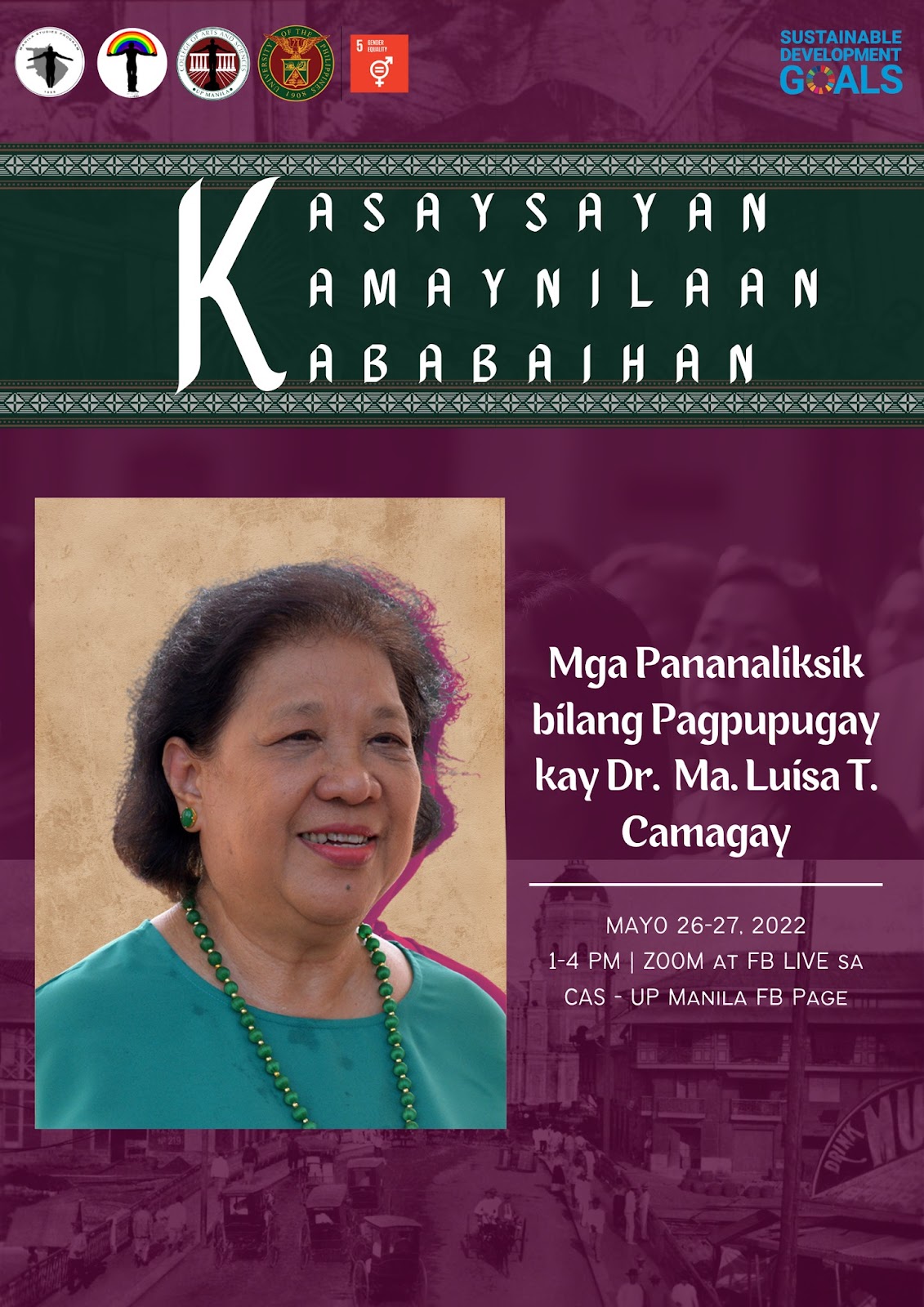 The College of Arts and Sciences Office of the Gender Program and Manila Studies Program organized a webinar on May 26 and 27 entitled “Kasaysayan, Kamaynilaan, Kababaihan: Mga Pananaliksik Bilang Pagpupugay kay Dr. Ma. Luisa T. Camagay” to honor her on her 72nd birthday.

The first day of the webinar focused on the lectures on “kasaysayang pampook sa Maynila” or Manila studies while day two tackled the historical discourse on women or “kasaysayang pangkakababaihan.” Dr. Camagay has been instrumental in the unraveling of the Filipinized history of the city of Manila and of women and their contribution to history through her numerous research ventures and affiliations.

Custello, Asst. Professor at UP Diliman College of Social Sciences and Philosophy (CSSP) Department of History, relived the intersecting state and development of public hygiene (salubridad publica), public health (salud publica), and public works (obras publicas) during the late 1800s and 1900s by presenting several impactful events such as the evolving urban planning and water systems as well as their effect on the public sanitation in Manila at the time. She also emphasized the geographical scope of Manila in the pre-war era which is only composed of Intramuros. The other barangays that we know of today as part of the city were merely suburbs at the time.

Galang discussed the collective biography of the Chinese immigrants in the country in the 1900s. According to the professor, the Chinese played a critical role in the “internalization” of the Philippines during the rise of trading systems across the globe (e.g., galleon) as they increased the local manpower in the country during the time.

Ong, for his part, presented the history of the Philippine General Hospital in its early years. He narrated how the construction of the hospital had been delayed and re-planned before it was built in 1907. He also discussed how, in the presence of foreign and local medical professions, PGH became a stage of conflict or tunggalian. 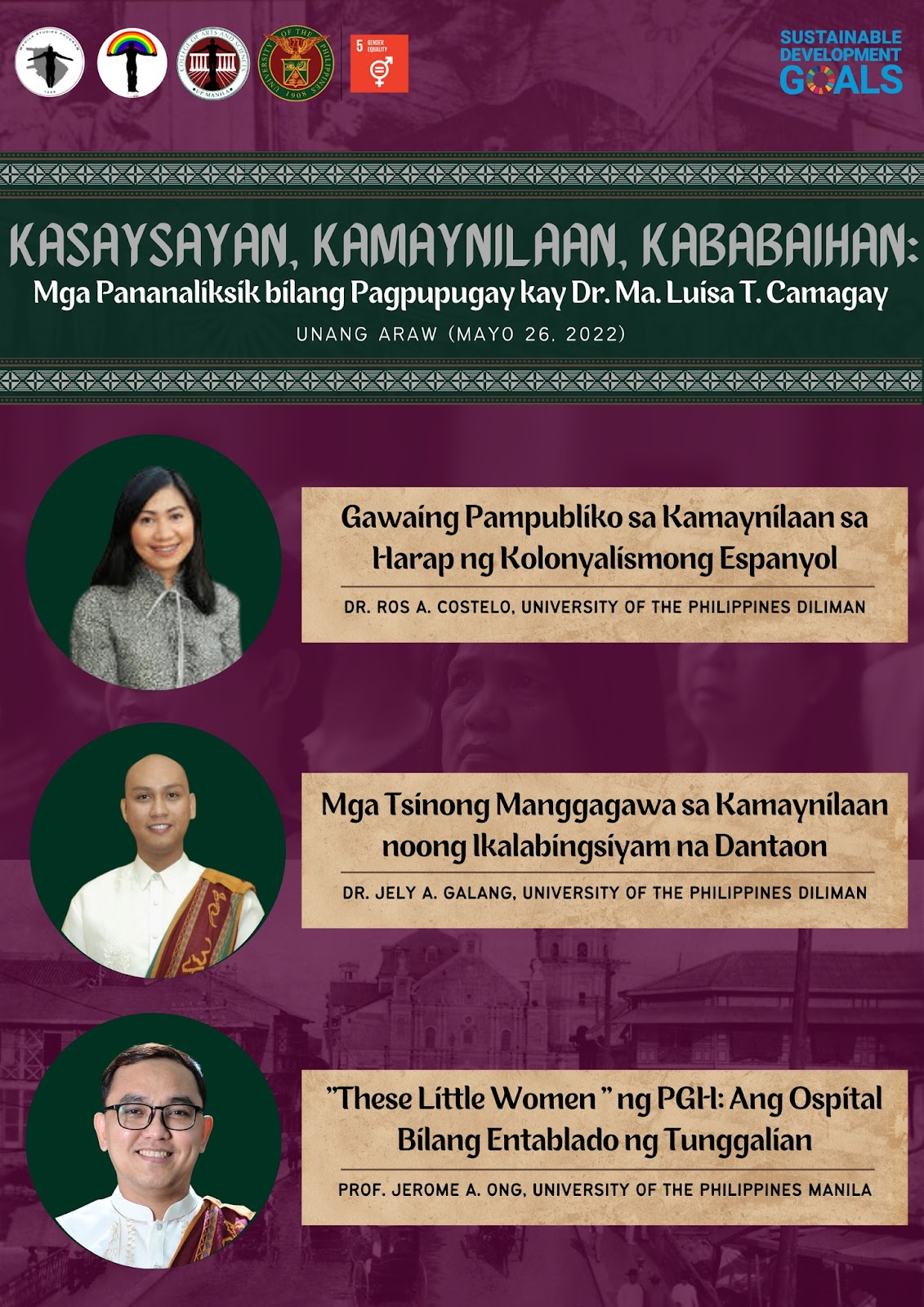 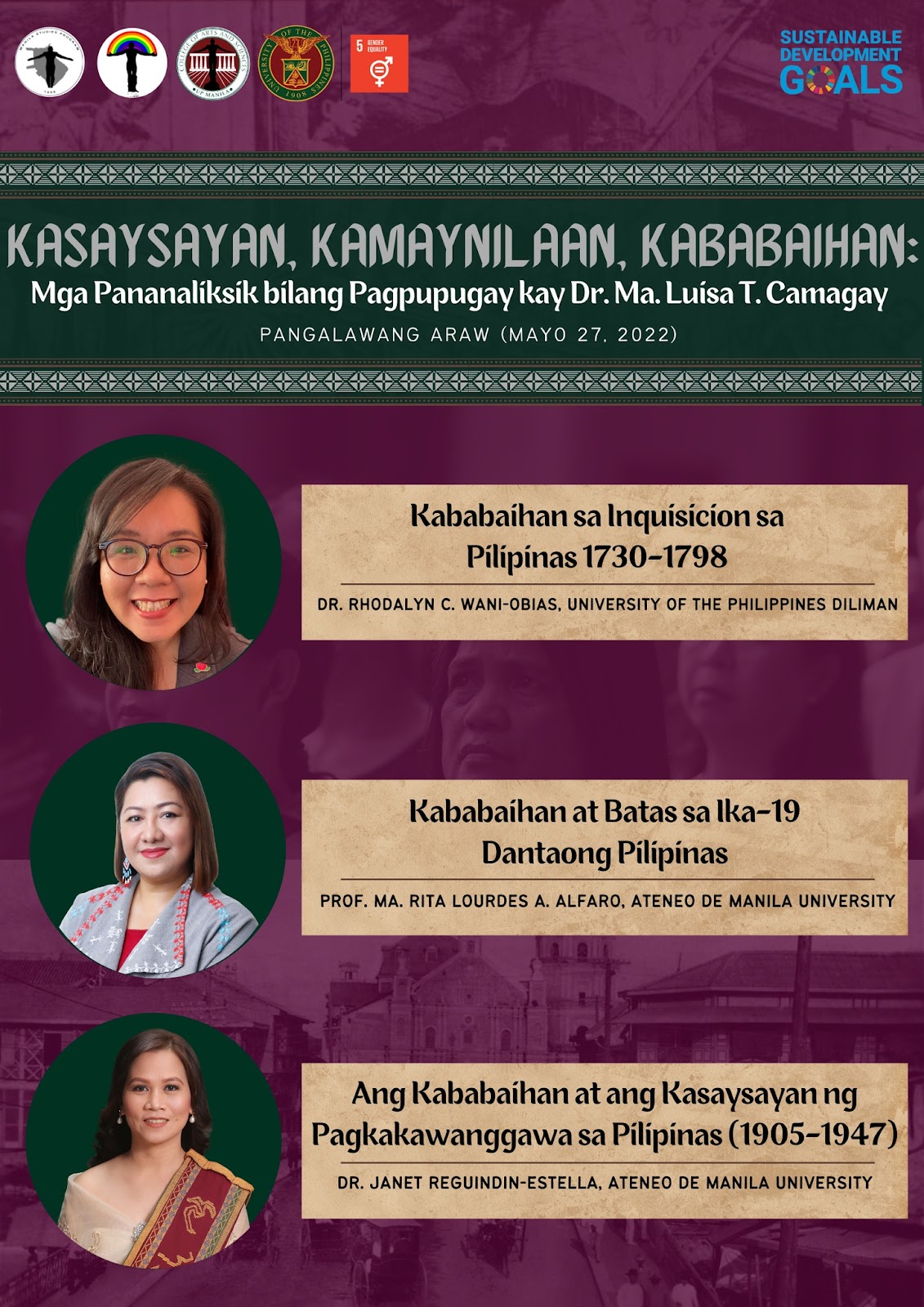 The first speaker for Day 2, Dr. Rhodalyn C. Wani-Obias, also from the CSSP Department of History, tackled the state of Filipino women from 1730-1798 relative to the inquisition or case investigations. She discussed the 12 cases of solicitation or the act among priests inviting Filipino women to engage in sexual activities. These cases were retrieved from the archives of Mexico. Wani-Obias explained the nuanced types of solicitation cases and the judicial processes for such. It has been highlighted that bias of the inquisition for the Catholic priests was eminent in the findings of her study.

The next speaker, Prof. Ma. Rita Lourdes Alfaro from Ateneo de Manila University, presented the intersection of colonial law and women in the 19th century. She reiterated how, in light of the civil law, women moved in a limited space – especially married women who serve as either mere subjects or shadows of their husbands. Women, in general, carry little to no civil, political, and property rights in this period. Alfaro urged the audience to study current Filipino laws as some of these may still discriminate against women. She pleaded that these should be amended.

Prof. Janet Reguindin Estella from the Department of History of Ateneo de Manila tackled the role of women in social work and social welfare during the American colonial government, particularly from 1905 to 1948. Estella explained that the concept of social work and social welfare in the Philippines was highly westernized; although later on, the concept became nuanced as its practice in the Philippines was influenced by Filipino culture. The concept of pagkakawanggawa was seen and gave way to the institution of various initiatives within the smallest unit of society (family) to the largest (i.e., public and private organizations). For Estella, the 20th century marked the alleviation of the plight of women in Philippine history.

The lecture part was followed by a tribute to Dr. Camagay from several individuals. She was awarded for her contributions to Manila and women studies.

Francis Nicole Maga | Published in UP Manila Healthscape Issue No. 40 (May 2022)